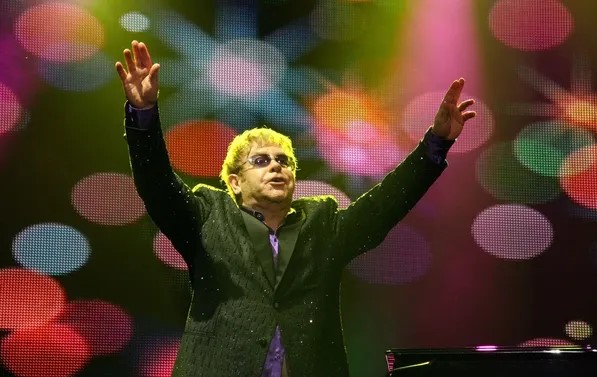 Reginald Kenneth Dwight, better known as Sir Elton John, is one of Britain’s most successful and talented artists, singers, pianists, and composers. Working with some of the biggest names across both music and movies, he has managed to create more than 30 albums, over a five-decade long career.

Selling 300 million records worldwide, Sir Elton ranks has one of the most recognisable voices in the world, with Candle in the Wind selling 33m copies, holding the record for biggest-selling single of all time.

After a farewell tour, encompassing five continents across 350 dates, Elton retired from live tours in 2018. He has continued to create music, hitting several top ten hits, which is a true mark of the everlasting impact he will have in the music industry for many more years to come.

Sir Elton has appeared at Sheffield Arena multiple times, but he graced our venue’s stage exactly 19 years ago, to perform his ‘West Coast’ Tour on 9th December 2002.

Catch Me If You Can is released, Eminem tops the charts, and Arsenal top the Premier League.

Below is the setlist from Sir Elton's performance at Sheffield Arena on 09 December 2002. Did you attend?

The Sheffield Steelers have been placed into COVID-19 protocol. Therefore, the following games are now postponed:


A decision regarding the Steelers’ game in Glasgow on 6 January will be made following the results of confirmatory testing.

More details will follow concerning any possible re-arranged fixtures on the above dates for teams no longer in COVID-19 protocol.

Please keep checking the Sheffield Steelers & Arena web sites & socials for the latest updates and as soon as we have more information we will announce - please keep hold of your game and any car park tickets as these will remain valid for the new date.

Our apologies for any inconvenience and hope for a speedy recovery to all and a swift return to hockey action here at the House of Steel - above all stay safe.